Changing the behaviors of people in an organization is tricky.

You can communicate what is expected. You can train people how to do the behavior. You can provide tools to make it easier. You can add incentives to help motivate people to do something new. And still, they will probably continue to do things the old way.

Because perhaps the strongest factor in how people choose which behaviors to do is not in that list.

In school, we called it peer pressure. At work, it’s called culture. But whatever you call it, the behaviors we choose are most influenced by the expected and real reactions other people have to those behaviors.

Consider a manufacturing company that wants to encourage people to speak up immediately about quality issues they see happening on the line. You can communicate, train, and pass out rewards, but whether an individual chooses to call attention to a problem depends on what they think will happen when they do. If a supervisor is alerted to a problem, is the employee thanked and something done to fix the issue, or does the supervisor get upset about one more problem to deal with or ignore the information? Do other employees jump up to agree, or do they ridicule or get mad when someone exposes a problem?

The trouble with changing someone’s behavior is that it requires changing the reactions of others in response to that behavior.

Let’s look at the likely results of positive and negative responses to current and desired behaviors. Here’s a quick diagram: 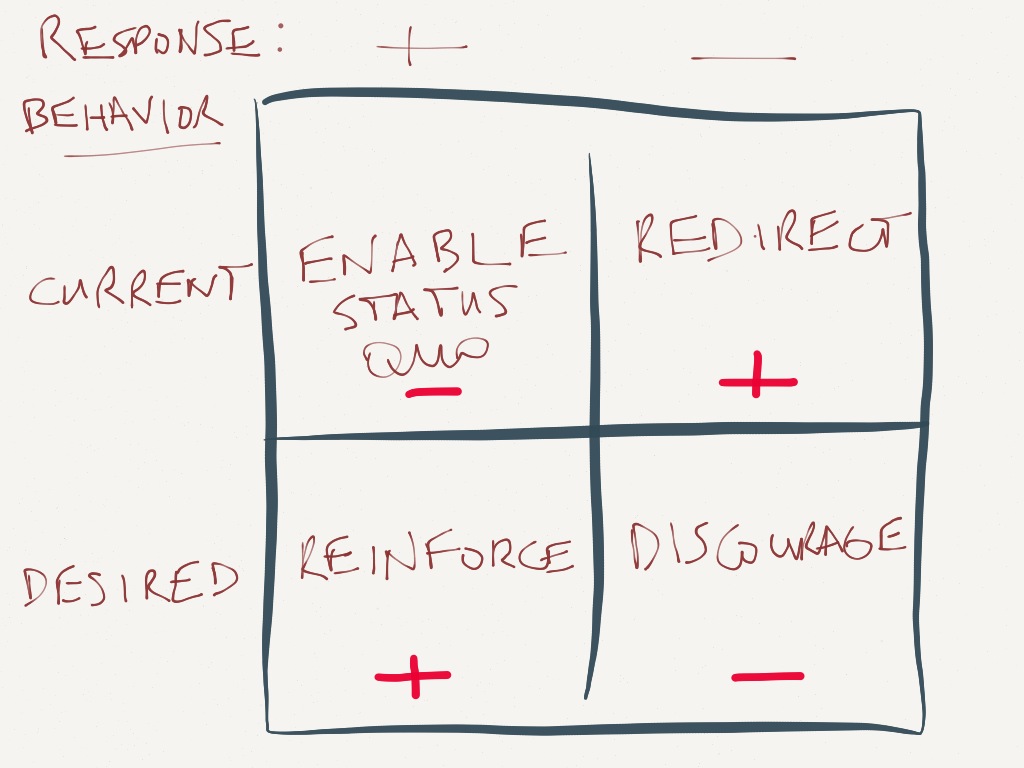 What happens when someone continues to do the thing they need to stop doing or replace with the new behavior?

Current Response:Â  If someone reacts to the current behavior by doing the same thing they always would, then the status quo is enabled to continue. Why change if no one seems to care?

Redirecting Response:Â  To change the behavior away from the current one, the reaction must be negative when it happens, with a correction that redirects to the desired new behavior.

What happens when someone tries the new, desired behavior?

Reinforcing Response:Â  When someone reacts positively to a new behavior, through encouragement or following through with the proper chain of events, then the new behavior is reinforced. The person will have a reason to continue to do the desired behavior and eventually make it into a habit.

Discouraging Response:Â  If someone receives a negative response to their new behavior, they will be discouraged from trying it again. And keep a watchful eye out for this to happen, because groups have a way of doing this that is socially acceptable, like friendly ridicule or admonishment when your back is turned.

The trouble with behavior change is that it requires a change in the reactions others have to the behavior – which is in itself a behavior change. When you have identified a key behavior that will help change your organization, map out the possible reaction scenarios and have a plan that addresses how others will respond to redirect the wrong behavior, or reinforce the right one. Figure out how you will stop reactions that discourage and those that simply continue to enable the status quo.

Yes, communication, training, tools and motivation are still important. After all, you first need to give people a reason to try a new behavior and enable them to do it before anyone can react to it. But unless you support the new behaviors and discourage the old ones (or wrong ones) with the proper reactions, your behavior change initiative will get stuck.

Previous Post: « Interview: Gaining Agreement on a Blueprint for Change
Next Post: Three Feats of a Savvy Change Agent »