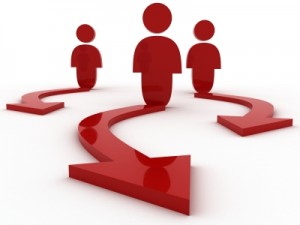 For more than 100 years, United Illuminating provided electricity to its customers in Connecticut through distributed operations. A few years ago, the company embarked on a strategic initiative to bring everyone under one roof in a brand new Central Facility. Although construction was moving along smoothly, it became apparent to the project’s director, Brian Horgan, that moving people would not be as easy.

The move wasn’t just a matter of relocating files and assigning new desks. To enhance collaboration, the organization was taking the opportunity to switch to an open office layout, which would require new habits. Since the new building was in a different part of United Illuminating’s service territory than the other seven facilities, the new location meant every employee’s commute would change, affecting their personal schedules. Within the facility, department adjacencies and physical layouts would change, requiring people to modify their work processes and relationships. As construction of the new facility went on, employees were starting to feel anxious, wondering how they would be impacted. As news was shared, the team started feeling push back and hearing complaints. It was clear a new approach was required.

In December 2010, the project team met for a one-day workshop to take stock of the potential “people issues” created by the move. The framework for the workshop, which I designed and facilitated, was later published in my change management toolkit called the Influence Change at Work™ Toolkit.

First, through a series of exercises, the project team identified the key transitions for the project. The transitions described the changes they wanted to influence as the organization consolidated from seven locations down to one. The team focused on three main transitions: Maintain Productivity – their customers’ service level would remain high during and after the move, with no apparent impact from the customer’s point of view; Generate Excitement – instead of feeling anxious about the move, employees would be excited and happy about the new facility; Increase Collaboration – the consolidation from multiple sites to one central facility would improve collaboration within the organization. Instead of being solely focused on delivering the building and physical relocation on time and on budget, the team agreed that to be successful they needed to help employees make smooth transitions as well.

Next, the project team identified potential sources of resistance and other obstacles that might prevent the organization from making the desired transitions. For example, though the team sought to maintain productivity, the job of identifying potential service problems and fixing them was too big of a job for the team. Instead of generating excitement, a lack of information and loss of control was causing some anxiety among employees, and for some departments, the potential loss of privacy was a concern. And the team anticipated that sharing common space for groups that had previously had their own facility could cause some contention instead of collaboration. Viewing the change from other employees’ perspectives enabled the project team to see their opportunities for facilitating the desired transitions.

Later in the workshop, the team brainstormed ways they could influence the transitions. How could they ensure service continuity? What could they do to get employees excited and not fearful about the move? How could they facilitate collaboration instead of conflict? While the team came up with many ideas that solved specific issues, one idea stood out as a solution to all three key transitions: creating a “Move Captain” role.

While there had been significant employee input in the design of the facility, until the workshop, the project team had not engaged the workforce on the change aspect of the move. The Move Captain role brought the project to the employees. Move Captains recruited from each department were responsible for ensuring that processes and plans were reviewed for service continuity. They each involved their colleagues in solving potential problems that would be caused by the move. They worked cross-functionally to improve relationships and enhance cooperation. And they also became the point person for fielding employee concerns. Move Captains were selected not based on seniority but because they were influential and trusted by their coworkers. The project team helped prepare the Move Captains for the role and supported them throughout the process.

After the workshop, the team went on to implement many of the ideas that were developed that day. In all, 22 Move Captains, each with a back up, acted as advocates for the move and represented employees back to the project team. In April 2012, the Central Facility opened and by October, all employees had been moved in, and according to the project director, “The overall response has been extremely positive.” There were no service disruptions during the move, which was the largest in the state in 2012. The move project came in under budget. No employees left the organization as a result of the relocation. The project team was awarded the prestigious CEO’s Award within United Illuminating. And the final audit report listed the change management workshop as one of the pivotal events that led to the project’s ultimate success.

Now, United Illuminating’s employees are settling into their new environment and enjoying the new facility. They are starting to see the benefits of enhanced collaboration through face-to-face communication. The relocation instigated many process improvements that continue to be examined. And, there is a camaraderie that comes from being all together under one roof that will set them up to better serve their customers in the future.