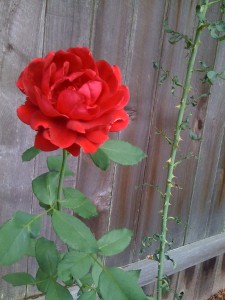 A few weeks ago, this beautiful rose bloomed from an otherwise untended, ignored and practically dead rose bush in our backyard.Â  It surprised me one day.Â  Glancing out the back window I caught the glimpse of the most glorious red against the backdrop of a dreary weathered fence.

That’s when this post was about succeeding through adversity.Â  And about how something that is meant to be will just happen if you let it.

That stem behind it mysteriously grew straight upward until it was four feet long.Â  Into a tree.Â  That’s when I decided to get involved, to help nature out a little by getting the rosebuds out of the tree and into the sun.Â  I found a plastic bucket (the kids’ kind that comes with a matching shovel) and discovered it I could hang it on the stem to make it bend just so.Â  A day or two later the buds started to turn red and maneuver toward the sun.

That’s when this post was about knowing when something needs a nudge in the right direction.Â  And about how you can set someone up to succeed and they will take it from there.

Then it rained a little bit.Â  And the bucket collected some water.Â  And the stem mostly snapped under the additional weight.Â  And the rosebuds ended up in the dirt.