Ever get through part or all of a change implementation and discover that it didn’t quite take? You thought you were done, but people are still doing things the old way and the benefits have not been fully realized? If so, it’s likely your change got off to a false start. The initiative has run down the track, but the organization was left behind.

Initiatives get off to a false start when you only take into account what is being implemented and ignore that people must also be moving away from something. As a result, people still hold on to their old ways. Luckily, just because you get off to a false start doesn’t mean it’s too late to fix it. The following example shows how you can recover with a change reboot. 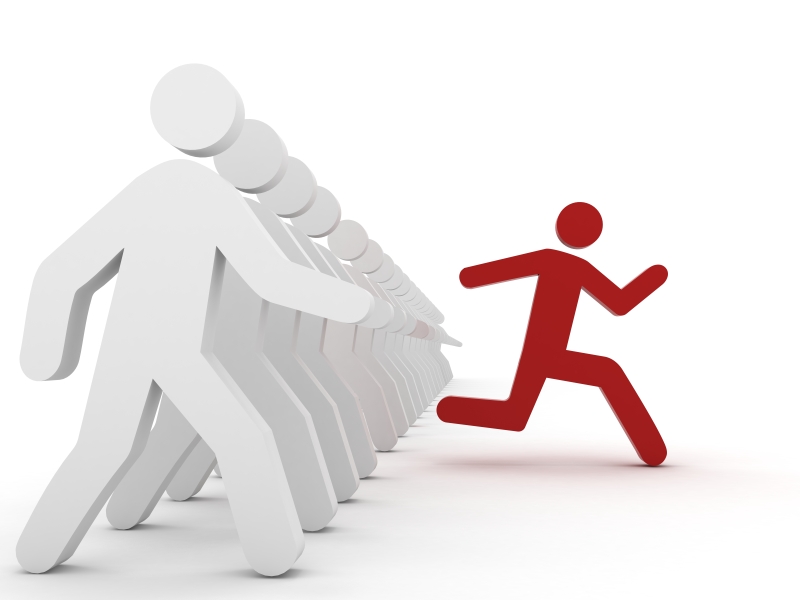 A college within a large public university had moved the processing of its fiscal and human resources transactions from dozens of individual departments to a centralized Business Service Center. Along with the transition, the college had implemented an enterprise resource management system to automate many processes that had previously been done on paper, spreadsheets, or staff members’ tools of choice.

Though the implementation was done, an audit revealed that many of the departments were still using their old processes in addition to using the new system. Instead of fully automating and centralizing their transactions, they were duplicating work and keeping some information locally. It was the discovery of these “shadow systems” that prompted the Chief Human Resources Officer for the college to enlist Enclaria to help her get people to let go of the old processes and gain more consistency across departments, so the college could fully realize the benefits of the change.

During the initial implementation, the department staff had been trained in how to enter transactions into the new system, but no work had been done to help them transition away from their old processes and tools. As is common, it was assumed that users would naturally eliminate redundant work as they started to use the new system. Instead, they continued to do what they used to do, and just entered the information into the system as well.

In order to let go of the obsolete systems, department staff would need to understand why the change was necessary, and also feel confident that the job would be done adequately in the new system. They would be far more likely to give up redundant processes if they developed the new processes themselves. It was clear the college would need to engage the department staff in developing the solution, instead of subjecting them to audits and more training.

Working behind the scenes through coaching, we designed the concept of a Business Process Improvement (BPI) initiative to reboot the system implementation project. Led by the CHRO with the Chief Administrative Officer as project sponsor, the initiative enlisted cross-functional teams from the affected departments to improve four main fiscal processes, such as purchasing and travel. Business students were recruited to help document processes and facilitate meetings.

The teams were tasked with documenting the current process for each department, understanding what needs any shadow systems served, identifying best practices, and developing a standard process that met the needs while eliminating duplication and reducing errors. The teams shared the proposed changes with each of the departments for feedback. Once the standard process was developed, the teams documented the steps each department should add or discontinue to fully implement the new process.

But before the teams could get started, the college needed commitment from the department chairs and managers to devote the staff members to the teams and to support the teams’ recommendations. To assist with communication to the department leaders, we identified how the BPI initiative satisfied their values and interests. It appealed to their interest in focusing more on academic priorities and students than on transactional work, and tapped into their desire to be on the leading edge of the university. We also looked at their current pain – hassles, errors, and extra work – that would impress on them that more work was needed to complete the implementation.

Since significant effort had already been expended in the initial implementation, to gain support for the Business Process Improvement initiative, the CHRO and CAO would have to admit that the benefits of the new system had not been fully realized. In a note to department chairs and managers, the project sponsor acknowledged that the change so far had “undoubtedly caused stress, confusion and frustration.” Then, he framed the BPI initiative as an opportunity to not only fix the issues but to reexamine and improve how they conduct business within their departments. The approach worked, securing the resources and gaining commitment to move forward with the initiative.

The BPI teams worked over the course of a year to document the existing processes and incorporate best practices into new, standardized processes. After the teams designed the proposed processes, they shared them to the departments for feedback. Then, the teams detailed the transitions for each department. The project leader and sponsor walked each department’s chair through the recommended changes to secure commitment for implementation. They also enlisted the CIO in making necessary system enhancements.

After the reboot, the vast majority of the college’s departments had implemented the process changes recommended by the improvement teams. The reboot project worked so well to engage staff and drive improvements, that they repeated the initiative for the remaining human resources processes.

As this story exemplifies, change requires not just installing something new, but moving away from old habits and processes. If your project has been implemented but people are still doing things the old way, it probably got off to a false start. To get it back on track, your change may need a reboot, which means starting over from where you are now and filling in the gaps that were missing the first time. Getting permission for a do-over may require admitting that what you’ve done so far hasn’t worked and that you need help. Then, you can identify the remaining parts of the status quo to leave behind, find new energy to finish the job, redefine the shared vision of the end result, and enlist people to participate in a new approach that will get you all the way to the finish line.

Previous Post: « The Standard for Change Management is Flawed – It’s Also a Step in the Right Direction
Next Post: The Conditions for Resistance-Free Change »